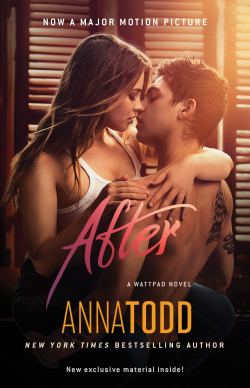 Rated F for Freshmen that make those fresh-y mistakes and don’t learn from them.

There was a time before Tess met Hardin, and then there’s everything after.

Life will never be the same.

Tessa is a good girl. She’s always followed the rules, worked hard, and even has a great boyfriend and got into her first-choice college. The moment she steps foot on campus, everything changes. No, it’s the first time she meets Hardin that everything changes. Everybody warns her about him, but she can’t help that they keep being drawn together.  He’s cruel and reckless, always leaving her feeling hurt one second and sweet, telling her he cares and that wants nobody else but her the next. But, try as she might, she can’t seem to quit him and he can’t stay away from her.

Everything she’s worked hard for is in jeopardy and it may just crash and burn for Hardin. Is it worth it? To try and love someone who doesn’t seem to know how?

Where the hell do I start!? Oh man, no. Just this book is a no with a dash of yes. I was so bugging out!

I became interested in this series when I saw the movie trailer. It looked amazing. I’m still planning on watching it, only when it’s out on DVD/Digital though. The movie cover for the book is beautiful! I love how dramatic and intense it. And the summery, sunset color is mouthwatering.

As for the book, well…

OKAY! I didn’t like it, or rather, I didn’t like the writing. It was driving me insane how terrible it was. It just about ruined the story for me, and I really enjoyed the story itself. It was filled with the complicated heart-pulling of drama and desperation of exploration and needing to be wanted, which can be dangerous. It can lead one to make really bad decisions.

Hardin and Tessa are complicated. The two of them are so different, yet they are drawn together by a dangerous magnetic attraction. Everyone around it could see it, and they tried to warn Tessa more than once, but Tessa kept going back to Hardin. There wasn’t a logical reason behind it either except that I kept getting the notion that she got thrills off of being hurt a lot. It was aggravating on a major scale. She kept saying the same thing over and over, almost word for word whenever she’d be hurt by Hardin. The circle got old fast.

One character won the great award the of hatred all the way around in the book, and that honor goes to Tessa’s mother. Nothing about her was motherly. In fact, I’m pretty sure she’s Satan. LOL. Controlling and cruel, nearly crueler than Hardin, I can’t believe she’s a mother to begin with. My jaw kept dropping with the things that would roll out of her mouth, What mother told their daughter they’re a slut just because they wear mascara!? I was so disgusted with her

More so, there were so many times I wished for the book to be more detailed. It was just too vague in many places and some bits could be omitted. They were parts I ended up skimming past because they weren’t important. I wish I wasn’t so bugged by things like this, but it disrupted my trying to enjoy this. It was as if Todd didn’t trust the reader to keep track of the story and characters and it came across as super basic, leaving nothing much to explore in the setting.

Side Note: Tessa is the only–ONLY college student I’ve met/read that can get her ducks in a damn row so fast and easy without a problem. Girl got a car, a nice paying internship in a dream spot and managed to stay on top of her studies. Like damn! I didn’t get that lucky in school and I worked my ass off. Real. Fricking. Hard. And the fact that she managed all of this like it was nothing off her back even though she blatantly says her mom worked paycheck to paycheck and she had to earn everything through grants and scholarships? Where the hell did she have the money to go shopping all the time and to get a car, let alone the time to do it?

Maybe the plot points and connections aren’t super important to some people out there that’s ve read the book, and that’s awesome. I mean that. Ride the wave if you can get past the illogical bits. But there was so much lacking. So much that was illogical and pointless. It drove me nuts. The emotions would’ve pulled me more if they were stronger, but the drama that Tess supposedly wanted to stay away from won out. I couldn’t register any emotions until the great ‘I love you’ came out and when it did I wondered where the hell the desire, passion, and crushing feelings were that come before it. Poor Tessa and Hardon just latched on and it was super awkward.

Did I enjoy this book? It was majorly hit or miss. There were more parts I didn’t like, but yes, I’ll definitely be finishing it! It was the end that helped me make that decision. While it was nearly exactly like the peak moment of Cruel Intentions, I want to know what comes next. The cliffy was a good one that took my breath away. So much heartbreak (and naivety). There are pieces everywhere and I can’t sort them out between Hardin and Tessa.

“All that I’m certain of is that my life and my heart will never be the same, not after Harden crashed into them.” (Tessa, p. 2)

“…You took my kindness for weakness and you were sadly mistaken.” (Tessa to Hardin, p. 325)