Smoke and Iron (The Great Library #4)

Jess Brightwell and his friends are spread out across land and sea and must play a deadly game of spies and espionage. Shaky allies and betrayal threaten their rebellion against The Great Library. Each will have to be strong and take care not to take a step in the wrong direction or it could cost them their life.

The resistance continues to grow as Archivist of The Great Library begins to lose his grip. In his panic, he unleashes a weapon that can destroy cities. Something that Jess has seen before. With his friends, they will fight to take it down and finally save The Great Library.

THIS IS A REPOST. In honor of the release tomorrow, I wanted to repost this review. I truly adore this series and Rachel Caine.

I won this ARC on Goodreads. I received is a proofread copy, so the quotes that I supply could change. My feelings on the book, not at all. Onward, booknerd.

You can find the reviews for the previous books in the series here: 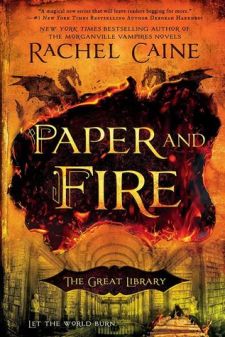 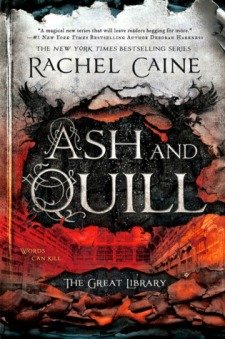 This series just gets better with each book. I’m serious! I’ve said it more than once and I’ll say it again. This book is unlike anything I’ve ever read. It’s smart, strategic, and fantastically worded. Every bit is so thought out and you don’t find that very often. It’s not unheard, but this take is to new lengths.

The rebellion is on! I’ve been WAITING for this! Wooo! This whole journey has led up to this and I was on the edge. When I read, most of the time I’ll pace. People ask me how I do it, but it’s just about the only way I get some serious focus. This time around, I was burning a trail into the floor from pacing so much. Haven’t done that since February when I read The Dark Calling (Book 5 of The Arcana Chronicles) by Kresley Cole. This was amazing!

There was a return of many incredible characters. The ballsy soldier, Troll, fearless smuggler Anit, and the tender-hearted assistant Neksa. Seeing these characters again is one of the most exciting things, especially since this war for The Library has officially begun. Everybody is picking their sides and all hell breaks loose.

Emotions were bouncing everywhere. With the characters apart for a while during the book I was really nervous. Everything was balancing on a pin and one slip and it could all fall apart. Now, more than ever, you’re taken deep into their thoughts and emotions. I was crumbling apart right along with them. Pretty powerful writing and overwhelmingly captivating.

As far as surprises and heart wrenching shockers, this book surpassed all of them. There were losses and revelations that I wasn’t expecting. Some regarding the relationships of these characters I’ve grown WAY too attached to and am not willing to give up. Dario and Khalila’s relationship takes a sharp turn as does Jess and Morgan’s relationship. For one, I squeeed with complete joy, but for the other I whimpered. To find out more definitely read the book because that’s all your getting from that. LOL.

So, I weeped and squealed and gasped. A lot of noises.

One of the biggest differences form the previous books was that this one split up into parts, following the characters while they were on their separate journeys. It was actually pretty great. This wasn’t just from Jess’s POV, but from Khalila’s, Wolfe’s, and Morgan’s. Each of their perspectives was incredible.

If you’ve kept up with my previous reviews, you know that there hasn’t been much I could say about each. The insight to how they saw this rebellion and their feelings toward their friends was just phenomenal because I’ve always wondered. Khalila is strong and brave, never letting anyone challenge her beliefs or ability to fight for them. Wolfe comes across as cold and unfeeling, but that’s not the case at all. It’s just about the opposite. Morgan’s precisely as Jess views her. Determined and will sacrifice everything for those she cares about. This was one of my favorite things about the book. I loved the insight. It was powerful and truly made the story that much better.

So, I’ve gabbed on longer than I planned. My bad, but not really, I could talk forever, though eventually I’d be spoilery. Don’t want that.

Now, as you noticed the book doesn’t get released until July. I’m so grateful to be able to read this advanced copy. As you know—well at this point I’d hope you’d know after the last few reviews—Rachel is one one my favorite series authors. She can really create a world beyond belief. I am always sucked into her books. This series hasn’t disappointed me once.

“There is a rot at the heart of what we love. It is not the knowledge or the preservation of it. It is the notion that only we can decide what is worthy, what is not, what is progress, and whether or not it should proceed.” (Khalila, p. 203)

P.S. Song today? Hear You Me by Jimmy Eat World

One thought on “Is A Life Worth More Than a Book? (Smoke and Iron – A book Review)”