The Austere Academy (A Series of Unfortunate Events #5) 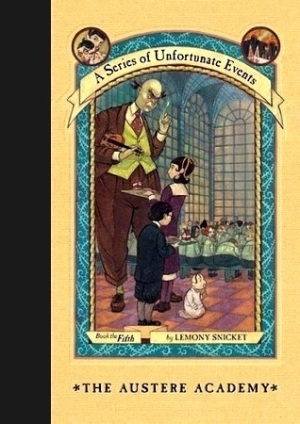 Rated V for a villainous vice principal that plays the violin very horribly.

If you were going to give a gold medal to the least delightful person on Earth, you would have to give that medal to a person named Carmelita Spats, and if you didn’t give it to her, Carmelita Spats was the sort of person who would snatch it from your hands anyway.

After the last guardians, the Baudelaire children have been placed, one would hope they’d be lucky enough to catch a break at Prufrock Preparatory School, but that’s a mistake. See, from the previous tales. You’d expect that Violet, Klaus, and Sunny to do exceptional in school with how brilliant they are, but that not the case. Stuck in a shack with only a bale of hay to sleep on and crabs snapping at their toes, going to classes that put them to sleep, and participating in S. O. R. E. leaves them exhausted, the children aren’t sure how long they can last and their excitement about going to school is quickly vanquished.

However, they aren’t alone. There are others that completely understand what they’ve been through and that almost makes this experience bearable. Again, this isn’t a happy chapter in the Baudelaire’s lives as one might think since they’ve found friends. It is, in fact, tragic as the Baudelaire’s do lose the friends they’ve made just almost as quickly as they’ve met them.

A Series of Unfortunate Events is 1 of 3 books series I am rereading this year as a part of my New Year’s Resolution. This is book 5 of 13. 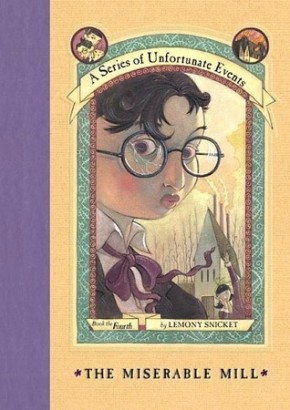 This had to be one of my favorite installments to the series. It was the book that took this series to the next level. This book moved it on to something much bigger than the Baudelaires. Their parents and the connections their family may have to Count Olaf. It made me incredibly giddy like I was a little kid again. This wasn’t just another tragic stop for the children like before. This is a beginning, a beginning for the mystery of VFD and so much more. Still utterly despairing and incredulous with a side of cruel violin recitals that would make anyone’s ears bleed, but still. And who doesn’t enjoy a good, twisted boarding school tale?

I’ve decided that just this once, there is a human worse than Count Olaf and it’s Vice Principal Nero. Mimicking and mocking and abusing the ears of young ones with his violin playing. He’s unbelievably horrible! Where is the principal, the one title that is above Nero’s? I kept asking myself the entire time.

The Quagmire triplets, however, are just the spot of sunshine the Baudelaires need in this grotesque place that lives by the motto: Remember you will die. Also, being the key that leads the Baudelaires to the major mystery of VFD was an amazing transition in the series. I also enjoyed the bits of poetry. Many times it was comical. The Baudelaires found so much more to hold onto with the Quagmires and so was I. It was fulfilling that they were able to share in their grief as well as connect as kids. Of course, it was ripped away rather quickly per usual, leaving them and me brokenhearted. Even though Snicket tells you to expect dread, it still hurts just as bad as stepping on a damn Lego block.

Snicket’s figurative language is still spectacularly solid and brilliant. As a middle-grade book, it builds vocabulary and holds suspense that I believe truly grapples young readers. They get heroes that relate to them in age and can inspire them.

While austere does indeed refer to boredom, this book was not that. Such an important stepping stool and reminder that this is a story about three children. Three incredible, smart, brave, and determined children. So much was introduced through this book and in my opinion, this is when the real journey begins. The one with purpose and agenda. This is when the story becomes about more than just a fortune.