The Miserable Mill (A Series of Unfortunate Events # 4)

Sometime during your life—in fact, very soon—you may find yourself reading a book, and you may notice that a book’s first sentence can often tell you what sort of story your book contains.

If you’ve made it this far then you probably know that the Baudelaire children have faced quite a few unfortunate events. They now come to the Lucky Smells Lumber Mill in the small town of Paltryville. There, they are put under the care by Sir, or rather they’re put to work by him. It’s as bleak as it sounds. With only a stick of gum for lunch and earning coupons as pay, the Baudelaires find that this shouldn’t be allowed. Neither should letting children operate heavy and dangerous machinery. Lumber and hypnosis threaten the middle Baudelaire, Klaus, and his sisters must figure out how to help him or else…a saying that typically refers to two alternatives, the second of which comes as a warning of something dreadful that may happen if the first alternative does not succeed.

The one good thing about this place is that Count Olaf is nowhere to be found. Or is he?

A Series of Unfortunate Events is 1 of 3 books series I am rereading this year as a part of my New Year’s Resolution. This is book 4 of 13. 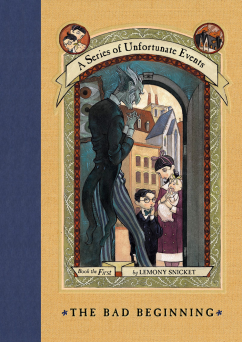 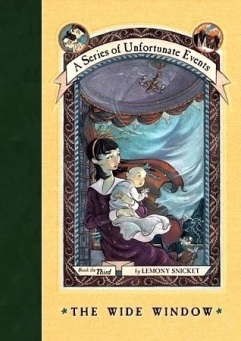 The Baudelaire’s enter a guardianship that isn’t of the traditional variety. Foster homes are well-known for being the next step for kids who’ve lost their parents and have no guardians to take them in, as are orphanages. But a lumber mill? There’s a first time for everything. LOL.

Somebody call OSHA! The fact that three minors, one of which can’t form complete words and sentences and is the size of a potato sack, are working in a lumber mill is disturbing! LOL. Of course, it’s also quite shocking because nobody really argues it except for Charles, the co-owner of the mill and of course, the Baudelaires. The mistreatment of not only the children but of the other workers is both crazy and depressing. From the lack of pay to the overworking truly emphasizes the title. The Baudelaire’s still surprise as they pull together and pull through. These children are intelligent and brave and stupendously courageous.

When a sibling is out of commission the other two pick up the slack to help. That was definitely one of my favorite parts of the book. Klaus found himself in a difficult position, but his sisters coming to his rescue is what family is made of. There’s not a moment I wasn’t rooting for Sunny and Violet as they worked to save their brother.

Count Olaf’s disguise reaches new heights with his old tricks of trying to steal the Baudelaire fortune. Taking up the role of female receptionist, Shirley over at the eye-shaped eye doctor’s office. One wouldn’t imagine an eye doctor is frightening. A dentist, yes. Totally get that. But here, the eye doctor, Dr. Orwell is no joke. In fact, the creep factor is high. Count Olaf and his troupe high. Was it a brilliant plan? Well, it was one that made me shudder with that numbing vomit feeling. LOL.

Snicket switched it up this time. Though this is a reread, I still enjoyed it thoroughly. Hypnotism, deception, and Sunny sword-fighting a psychotic eye-doctor. Is it as miserable as the title suggests? Yes, but not in the reading sense. It’s miserable for the Baudelaires and it doesn’t seem to be letting up. Still, against the odds, they manage to prevail against those that work against them and that’s more than just Count Olaf.