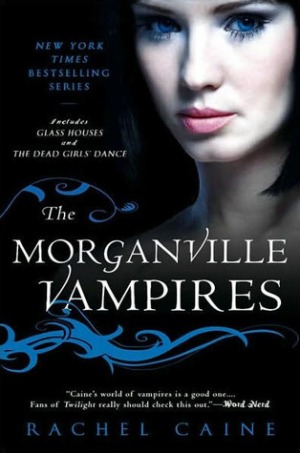 Rated F for fangs, fighting, and a side of goth-bomb sarcasm.

On the day Claire joined the Glass House, somebody stole her laundry. (Glass Houses, p. 1)

Morganville is a small town in the heart of Texas. The college is quaint. The local coffee shop holds all of your caffeine and Wi-Fi needs. The houses are old and the townspeople are skittish. The further you go off the beaten path the more you realize this town has a lot of secrets. At least that’s how it is for Claire Danvers. Accepted to college at sixteen, she quickly discovers what it’s like to get on the bad side of the resident psycho-rich girl, Monica Morrell. What she didn’t expect was to delve into the nightlife and secrets of the town after moving into the Glass House. Though her roommates don’t show any signs of life, she discovers the town’s deepest secrets and they’re out for blood, her blood.

Claire Danvers is adjusting pretty well to Morganville, an old town, run by vampires. When Shane’s father comes to town to kill as many vampires as possible as revenge for the loss of his daughter and wife because of them. As Claire’s and her friends’ lives threaten to rip apart at the seams, she must think fast to help them before all hell breaks loose with them caught dead in the middle.

The Morganville Vampires series is 1 of 3 that I am rereading as a part of my New Year’s Resolution. This is 2 of 15 books.

Where the fecking hell do I begin!? Sorry, turning down the excitement…but not really. Saying that I’m in love with this series is an understatement. A major one! This isn’t some Twilight or The Vampire Diaries. These aren’t vampires that you’ll fall in love with. It’s more like a: “Oh god! Oh god! I’m going to die!” kind of vibe. Utterly sharp and witty, I couldn’t put this book down until I was done, just like the first time. Claire didn’t expect her first time out in the world to involve life-threatening situations with vampires and I didn’t expect to get so obsessed.

The shocks and twists still get me smirking. People aren’t always as they seem and that is especially the case with the vampires of these books. Will they kill you or save you? Claire does walk that fine line. And, I admire the way she just automatically fit in at the Glass House the moment she walked in and in some cases acted more mature than her housemates. Granted, she filled to the brim with awkward, but aren’t we all? As she snaps into mature mode pretty fast, dealing with things she’s never had to in the past, like mean girls, boys, seances, and vampires, she surprises everyone with how she thrives with her boldness and bravery in the face of terror and danger.

So much originality. Claire is too smart for her own good and I love how each of the other characters from Michael, Eve, and Shane (and hold gods, I love Shane), to the vamps: Oliver, Amelie, and Sam really stand out and I can see them so clearly. And the town of Morganville is truly unlike anything I’ve ever seen. However, I can totally relate to how Claire feels about her college and how it seems rundown, just not the bit where students disappear sometimes due to being vamp-chow. It’s a town that you’d look at and not give a second thought to or think about living in. It’s unmentionable, passable, making it a perfect place for vampires. The developing relationships and bonds start strong right out of the gate. I was just immediately hooked because of the chemistry between the characters, especially Claire and Shane. I love those two together so ridiculously that I forget how necessary it is to breathe. LOL.

Imaginative and original and witty. There’s nothing like this out there. This series is always a pleasure to read and write about. The paranormal and YA genres are my favorite. If I’m honest though, when I came across this series I was incredibly skeptical because of something crazy. Some of the character’s last names of MV are the same from a favorite movie of mine: The Covenant. It makes me laugh more than anything now. See, Claire shares her last name with the movie’s main character, Caleb, and Shane with the movie’s villain, Chase. In the end, the curious summary and these last names got me to pick up the book. I’m so glad I did.

PintrestThe more I think about it, the weirder it is, but I guess I can thank Monica for being a real bitch or else Claire would’ve never come to become a part of the Glass House and the dangerous, life-threatening adventures wouldn’t be the same. So, thanks, Monica? Ugh, I can’t say – or write – that with sincerity. She’s a real piece of work and by that, I mean a classic Mean Girls plastic of Morganville with a sprinkle of psycho. LOL.

Once again, I have to gush about a book series that should be a TV series.

Am I still saying this should be a TV show? YES! This isn’t some gushy love story…well, there are moments and I still melt into a puddle at them, but this is about living with vampires and realizing that they’re not always cuddly. It’s smart and resourceful and I still crack up at the sarcasm. Do I have a cast list in mind? Yes, but don’t worry. I’ not going to list it out. I do think this could renew the dying fandom for vampires though. Make it fun and entertaining and engaging again.

This is my third time running through these books. I don’t often reread books, but with this series, I will always reread them and for those who love vampires, I will gush and recommend MV to them as well. Action-packed, butterfly-inducing, and fast. This isn’t your typical vampire story or town.

“Damnit, she resented being scared in a library! Books weren’t supposed to be scary. They were supposed to…help.” (Glass Houses, Claire, p. 147)