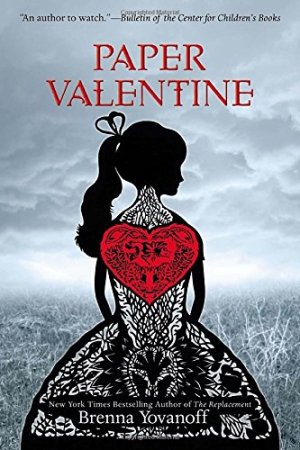 Rated C for chills creeping down your back thanks to your dead best friend haunting you.

I am not the kind of person who gets haunted by anything.

The city of Ludlow, the kind of city that isn’t very big but the population is, is suffering its hottest summer on record, but Hannah Wagnor is getting the chills. Chills because her best friend, Lillian, who died six months ago, is haunting her.

The summer takes a turn as girls turn up gruesomely murdered with little Valentine hearts by their bodies and somehow, she’s in the middle of it while she’s still grappling with how Lillian self-destructed up until she died. A curfew is put across the city. The police are watching everyone closely. Hannah is drawn further into the world of ghosts and this killer, but she’s not alone. She attracts the attention of quiet, delinquent Finny Boone and while she can’t really put her finger on it, she can feel her life changing and for the better, but she’ll have to figure out who the killer is to keep it.

While the writing style threw me off here and there because it felt choppy and unnatural, I got some chills of disturbed with this story. Some emotions were had too.

I enjoy horror and tis the season for some of that! the main character, Hannah took on some struggles with life that I was really surprised with. Not only was she dealing with the loss of one of the most important and influential people in her life, her BFF Lillian, but there was an in-depth look at how she lost her because of an eating disorder. Now, I’m about to get a little personal, but don’t get too serious on me, okay? This look into how this eating disorder effected not only Lillian but Hannah as well struck me right in my past. If you’re sitting there thinking, “Oh dude, did this weird, spastic blogger have an eating disorder?” then yes, you’re right. And, the thing about it, is that age for something like this doesn’t matter. I was a little girl when I had Anorexia. It was what it was, I’m doing pretty good in the food area now. In fact, I LOVE food! Mexican in particular because spice is the life and any kind of breakfast food is the way to my heart. Anyway! This very real subject brought into a narrative about a serial killer and ghosts was incredibly creative. It was a way to go beyond a disorder killing the one it effects, but also the way it effects everyone afterward, and in the midst of something deadly no less. It brings an understanding of sorts as well as heartache. It’s the how and why; the questions that several seek answers to. It just really struck home with me, and I really like how it was incorporated with the storyline.

Horror can be tricky because getting the scary and jumpy parts on a page isn’t like putting on a big screen; while The Space Between was okay though a little flat, I like the interweaving bits. It was a strong tie between reality and the world of the supernatural. Granted, there were moments that broke this wall for me, but it wasn’t enough for me to find any serious dislike in the book. Where an ending already happened, a beginning came into being. It was like a reversal.

I loved the main characters, but the secondaries like Angelie and Ariel were real grating. Mostly it was because I was reminded that people can act real selfish and mean like they did. Hannah and Lillian had real depth. While I admire the way Hannah is reserved, I also admire how outgoing Lillian is. The duo is true opposites but best friends because they found this special bond. Finny was just strange. The mysterious quiet drew me in, but envisioning what he looked like was so goofy! I couldn’t get a complete picture. LOL. The development wasn’t very strong with either, but discovering all of his little nooks and crannies made up for that.

A pretty decent read! Not major heebie-jeebies but I got some chills. I really loved the friendship and creativity that Yovanoff created here. This felt like the hometown you didn’t expect bad things to happen even though there were skeletons. I’m not saying this is an absolute favorite, but it surprised me and was worth the read.

“I’m not those things you think I am. Yeah, I looked bright and shiny on the outside, maybe. But inside, I was always just the same as you. Underneath, I wanted all the chaos and the scary, messy stuff. I think I was always just this—this strange, secret girl who always wanted to kiss Finny Boone.” (Hannah, p. 255)

“I’m not a victim or a fragile little thing. And maybe there’s all kinds of dangerous stuff out there, but not you. Okay? I don’t need to be kept safe from you.” (Hannah to Finny, p. 272)