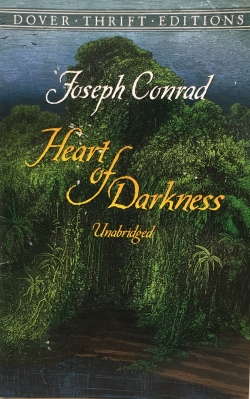 There is a taint of death, a flavor of morality in lies-which is exactly what I hate and detest in the world—what I want to forget.

Up the Congo River, follow Marlow on his journey. He meets Mr. Kurtz, an ivory trader who has a mysterious, godlike presence over the region and its inhabitants. During his journey, Marlow is obsessed with the man. Both intrigued and disgusted by him, Marlow is shown the darkness and despair that dwells within man in this jungle.

This review is going to be shorter than my usual ones and that because I didn’t really enjoy this one. There was nothing wrong with it, we just didn’t mesh. Sometimes the bookworm and the book just don’t work. This is one of those cases. I did finish it. I just can’t say that I enjoyed it.

The theme of the darkness that dwells inside humanity was really strong in this one. In the depth of the wild which draws out the beast even in men—a side that we often don’t like to think about or imagine that we have. You never see it until you’ve been pushed to limits you never knew existed. I mean, this is more than just button pushing. This is mind-breaking.

The style of the short story was poetic and dark and bridged on horror. Horror that lives in people that nobody knows about, not even that very person sometimes.  It was chilling and deep and read much like a journal. Though the story was short, it took me some time to get through it, like crawling through molasses, which I don’t like. It was detailed not so much visually, but philosophically, I felt. In some places, I was left in awe by Conrad’s words and in others I was falling asleep. It was a real push and pull.

The characters, Marlow and Kurtz, came across maniacal in their own way. Marlow was obsessive to a very scary level that made goosebumps crawl all over me. Right up until the end he was unable to even think about anything else unless it had to do with him. Kurtz came across as a very unstable individual. Narcissism became very dangerous in the form of this character. Everything circulated around him. Each felt incredibly drawn out which was another part of the reason I wasn’t fond of the story.

I enjoy diving into classics. There’s a wisdom in them that can and should be taken away from each of them. The lessons they teach or emphasize upon is so important. However, I didn’t enjoy this very much. I seriously struggled to get to the ending. The is one of those that is either eye-opening or it is just blah. I fell to the blah side.

“The fascination of the abomination—you know, imagine the growing regrets, the longing to escape, the powerless disgust, the surrender, the hate.” (p. 4)

“The earth seemed unearthly. We are accustomed to look upon the shackled form of a conquered monster, but there—there you could look at a thing monstrous and free.” (p. 32)