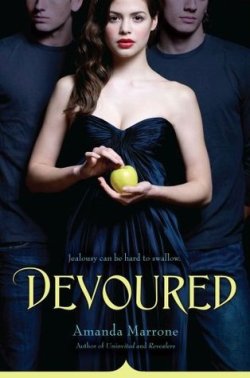 Since the car accident years ago, Megan has been trying to move on with her life. It hasn’t gone well. Her mother is obsessed with dog dancing competitions. Her dad has been in a coma since the accident. And Remy, Megan’s twin sister, has been haunting from beyond the grave.

Now, she’s gotten a job at an amusement park. Of course, she didn’t get the job to keep tabs on her boyfriend and his best friend (who admitted her undying love to him). And the cute boy, Luke, who works there too (and whom her friend likes) doesn’t matter either. Nope. She just wants a normal summer job experience before she goes off to college.

When Remy starts saying weird things and causes things to break, Megan has to figure out what’s going on. People are missing and with Remy’s violent outbursts, Megan just knows somebody is going to be next, but who? She knows she should avoid Luke, but he may be the only that can help her.

Megan isn’t the typical teenage girl. Or at least I don’t think talking to ghosts is typical. Neither is a magic mirror. Yep, that’s right. A magic mirror. If you’re thinking about Snow White then you’d be in the right area. This book stems from the fairy tale. In this book, Snow White is a true story and that pesky mirror is actually a prison for the djinn inside of it.

I thought the idea of the mirror being villainous was incredible since its viewed as nothing more than a pawn that is under the Evil Queen’s control. Instead, the mirror is the one in control, causing paranoia and fear with its visions of the future. The other connections to the fairy tale with Megan being as fair as Snow White and the family related to the woodsman was a great tie-in since the book wasn’t a retelling.

The writing really had me on the fence. There were times when the writing kind of dozed off. Some bits came off as pointless in regard to the story and I didn’t understand them. Megan’s love triangle with her boyfriend and his best friend, for example. It was just awkward. This issue that Megan had with them didn’t feel like it was any part of the main plot. It came and went and I didn’t get any strong feeling that Megan truly cared, especially since this relationship was so new. There was just no real attachment, I felt.

The style, however, was witty and funny at times, lightening the story up some when at other times it got scarily dark. Remy is one terrifying little girl, and I’m talking on a Supernatural level. The psychic energy was strong in this book, which was cool. I haven’t read many books that include the psychic ability. That last one I read was back in high school and it was Dark Visions by L. J. Smith. So, getting to read another novel that included this was great.

Megan was at times a curious character, but overall, I wasn’t a fan of her. While I understood her heartache after everything she’d been through, she was quite bratty at times. I loved her best friend, Nicki, and the cute boy, Luke. Luke was swoon worthy and Nicki was outright hilarious. There were a few times when she’d say something I’d say. So, there was a fair share of those I liked and didn’t.

This wasn’t some Disney movie. Nope. It was pretty twisted and quite surprising at times. I liked this book and yet, I didn’t. The villain was pretty awesome. For the first time in a long while, I really dug him and thought he was cool. The djinn was such a trickster. I liked him more than the other characters. And as a side note, the cover was a little confusing. As you can see, it’s Megan between two boys while holding an apple. So…there’s no apple involved in the book. Also, only one boy got seriously involved in the mysterious ghost-psychic mystery and overcoming of tragedy. All in all, the cover makes no sense, though the color scheme is vibrant and beautifully dark. This book had me feeling all kinds of mixed up.

“…Anyone with more than twenty lawn gnomes in their yard was most definitely a psycho, not a psychic.” (Nicki, p. 30)

“Land of Enchantment isn’t just about stereotypically helpless women in need of rescue—there’s Hansel and Gretel’s Haunted Forest, which is more of a celebration of child abuse and cannibalism, and the petting zoo in Mother Goose’s Family Fun Farm, which is all E. coli, all the time!” (Ari, p. 37)

Thoughts? Tell me in the comments belo