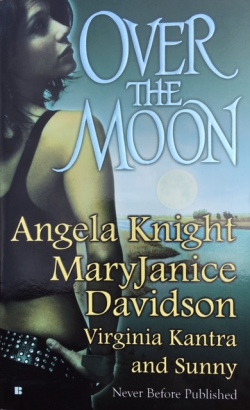 Experience the lure of the moon…

A beautiful werewolf in the chains of old and violent traditions falls into the hands of a lone werewolf in hopes that he can save her. With tensions running high under the Burning Moon, they get more than they bargained for.

In mountains, a girl goes on a life-changing trek, looking to find herself and finds so much more when she happens upon a group of strangers, one of which is more gorgeous than she has words for. She gets caught up in a world between mortals and fae.

A vampire and a werewolf collide, yet these two opposites can’t pull away from each other.

In a world where souls are born of the moon, and Queen of an otherworldly nature have control over warlords.

Fun and wild, these four short stories are like letting your inhibitions go. These ladies created fantastic worlds that lets the imagination out of its cage. Sometimes you desperately need that and they didn’t hold back. Each story was mystical and hot to the touch.

The cover art was also gorgeous. Mysterious an alluring. I also have an obsession with the moon, so the title really worked me in too.

I must say that Between the Mountain and the Moon and Mona Lisa Three were my favorites. They not only held adrenaline rushing romance that had my toes curling, but they had a really good story to them as well. I really like the characters and how independent they were. I get a little deflated when the characters get ruled over by other characters. It wasn’t just romance for them, though it was a big part of their lives.

Between the Mountain was really beautiful and scary. Getting caught up in the fae world is like that. Its enchanting looks hide away that its dangerous. Mona Lisa was similar. A  queen, had a family she cared for and multiple lovers. It was a little wild, but the magic of it was so original. I’d never read anything like this life or death story. The emotions of whether she’d lose people she cared about unless she went through with a heinous act were intensely strong.

I won’t say that these are earth-shattering. They aren’t. The writing isn’t very in depth nor enough to really stick with me. I didn’t find myself lingering all that much. I certainly didn’t get attached to the stories or the characters like I typically would when reading. That’s fine. It makes the stories enjoyably for one reason. Thrills and chills. And of course that steaming hot anticipation.

This was a fun book that really got my blood pumping and my mind racing. Though, I didn’t feel attached in any way. With enchantment, those typical daydreams every person has gets enhanced threefold. Definitely a quick read that’ll leave you breathless.

“Take two alpha males, add a female in her burning moon, and you had a prescription for bloodshed.” (Moon Dance, p. 19)

“Her fate is their punishment.” (Between the Mountain and the Moon, p 151)