Thebes of the Hundred Gates 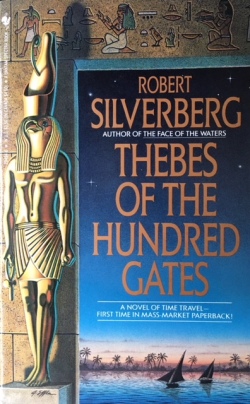 Twenty-seven-year-old Edward Davis is a promising rookie in the Time Service. He’s passed all the tests, but it’s a completely different ballgame to actually jump back in time. Leaping back to 35C, Eighteenth Dynasty Egypt, he has to find and bring back two teammates that got lost in time. Surrounded on all sides by the bustling life of the bazaar with the hot sun beating down on him.

Suddenly, he’s taken in by a priestess and befriended by the slave girl assigned to help him get well. When he discovers the fate of his lost teammates any chance of getting home turns dangerous. Yet, with the allure of the grand city that he’s only dreamt of seeing in real life, Edward begins to wonder if he even wants to go back to his time.

The detail was just stunning. Truly. Vivid with wondrous color and way of life. When it comes to world history I was fascinated with both Greece and Egypt. It’s the construction of their amazing architecture and their religion system, society, the fashion, the way they handle death. It’s my favorite study. It’s almost like a fantasy, I guess. Granted, there were also a lot of tragic aspects as well: slavery, disease, sacrifices to the gods. Nonetheless, I found Ancient Egypt to be one of the eras that was pretty advanced for its time. The acute imagery was powerful. Such beautiful description down to the very crevices of life and death.

This was a speedy read at a mere 116 pages. It was still pretty interesting. Though the chapters were short, they left me excited for the next chapter.

TIME TRAVEL!!!! One of the funnest parts of the sci-fi genre. Who doesn’t have a time period they wish they could go to! I’ve already said Ancient Egypt is one of them, but just to reiterate—this was a cool place to go back in time to.

The characters were very interesting. Edward was no newbie, but he didn’t hide his boyish excitement, and who would!? It was like jumping into the middle of a TV series. You get a taste of these characters and their story in one of the best ways—by getting dropped right smack dab in the middle of it. I do think that there could’ve been more to their background. It felt very vague, especially regarding the Time Service.

The dangers and expectations of working as a time travel were well done. Very realistic. Edward took all the precautions, making sure to blend in as best as possible, so he wasn’t a total rookie, though he didn’t except to get tangles with a slave girl. It was enticing.

But…yes, I’m sorry. There’s a but. People hate them, but I have one. There were drop off points where I guess I was supposed to pick up on the situation, but was left with noise. I mean it. Just characters making noise. It was slightly off-putting. Now, I assumed there was some intense things happening, but I really wished there had been a little more depth to parts like this to better the imagery of these moments. What can I say? When you give such great imagery, then drop off as if it’s too awkward, then I’m going to complain.

My only issue with this book was that there wasn’t enough background on the Time Service and the characters. But the imagery was vivid and incredibly believable with its accuracy. A really interesting read, especially for fanatics of ancient Egypt. A lot happening, and a fantastic close-up in history, in this small novel.