Watcher in the Woods (Dreamhouse Kings #2) 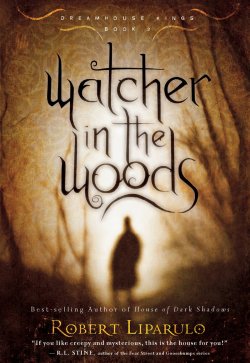 After Xander’s mom is kidnapped and dragged through one of the dimensional doorways of the house, the rest of King family rallies together to get her back. Secrets about they really moved into this mysterious house is divulged and the Kings will never be the same.

A new school year begins and the townspeople of Pinedale are starting to suspect the King family of strange things, like abuse. With the mystery of the house, and a strange man stalking them, they have to stand together if they hope to get their mom back.

This book was better than the first one by a hair. There were many new elements and characters. Turns out, Dad has been in this house before. There’s an assassin that came through one of the dimensional doors that wants the house for himself. A bully harasses David.

I liked that the novel spread out some, going to school and that clearing where you can nearly fly. New settings really open up a book. However, the clearing (the anti-gravity clearing as I call it) was very strange and out of place feeling. There was so much I Don’t Know that it was just pointless. It didn’t bring very much to my imagination nor did it do anything for me but feel weird. The school was really cool because there was a glimpse of it in the first book. Now, school is in session and obviously, nobody wants to go.

The storytelling didn’t improve by much. I’m still a little confused because the characters aren’t making much sense of everything so neither am I, but I did like that the emotions were higher. Dude, mom is gone. Time to crank this up to eleven! And there’s an assassin! (The flashback of the assassin’s time before getting teleported into the Dreamhouse was out of place feeling, too.) I liked that the intensity was kicked up a notch. Everybody is freaking out.

Still not a book that did much for me. My heart got pulled a little. I love my mom beyond words and I’d be going all terminator if somebody kidnapped her so, I can relate to Xander on that level. The storytelling felt like a jumbled mess and therefore didn’t really pull me in even though the imagery was great. A strong feeling of meh.

“He thought he could be a hero, and now he was about to get shot or blown up or…something that amounted to the same thing: dead.” (David, p. 4)

Thoughts? Tell me in the comments below?