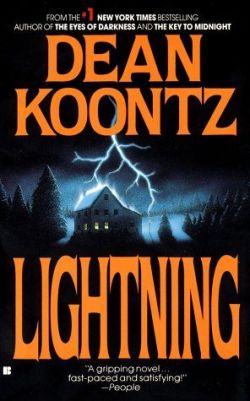 Destiny struggles to reassert the pattern that was meant to be.

A storm struck and lightning streaked the sky the nigh that Laura Shane was born. There was something strange about it that people would remember for a long time. The blond-haired stranger that came out of nowhere and saved her from a fatal delivery was even more mysterious. He shows again years later, and again later, saving her over and over.

Laura believes she has a guardian angel that watches over her. But as tragedies strike, she begins to questions whether this blond-haired stranger is a guardian, but rather a devil? Why is he watching out for her? Why mess with her life, her fate?

This book marks 11 out of 25 authors, from my New Year’s resolution, that I’ve never read from before. Over and over, I’ve been told how great Dean Koontz is so I was amped to put him on the list and finally start reading some of his works.

Laura led a complex life, but with her guardian angel that’s protected her since birth it’s a little better, a little more hopeful. When she finally gets a moment to talk to him and ask him why he’s chosen her to watch over the answer stuns her, changing her life forever. He’s in love with her.

My mom recommended this book to me and as my first Dean Koontz book, I liked it. This is her favorite by him. She does nothing but gush about it. I also have an obsession with lightning so I was excited to read this book on just those two principles. LOL.

The characters were so beautiful. I was really taken with them. My heart went out to Laura who went through some really tough and dark times as she grew up, and survived them. My heart just dropped right out my chest and into La La Land for Stefan (that blond hair and blue eyes *sigh*). I couldn’t stop laughing at Laura’s best friend, Thelma, and Laura’s son, Chris because they were just too damn funny. What each of these characters brought to the book really rounded it all out.

The element of time travel was so eloquently done with how Stefan shows up periodically throughout Laura’s life. Very creative with the lightning; using it to travel was really unique and breathtaking. Lightning is such a powerful source. It can kill a person and bring them back to life. It’s impossible to control and one of nature’s most splendid forces. I was super intrigued by it!

The writing really just pulled me along. It was done in two parts, which basically follow Laura as she grows up and then goes on to follow her and Stefan when they finally come together. Filled with romance, action, and suspense, this book was filled with entertainment from beginning to the end. Definitely one of those ones that’ll have you going, “Well, that escalated.” as well as have you feeling moved beyond words.

I may not have loved this book as much as my mom, but I certainly enjoyed it. This book left me with that sweet long feeling that leaves your heart feeling heavy and full. The ending was sweet and tender. Laura and Stefan were such amazing characters that swept me away. Both of them are strong with such big hearts.

Just a side question: Why hasn’t a movie been made based on this book?