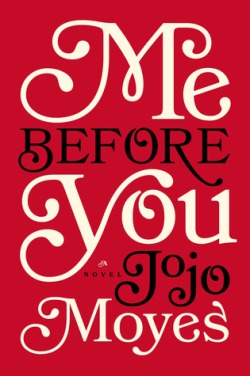 Everything in Louisa ‘Lou’ Clark’s life is routine and normal and nothing more than normal. That’s okay with her. More than okay. She doesn’t need an exciting life. But when she’s laid off of her job at the café, which she’s had for six years, she must quickly jump back into the job force. With little skills, she doesn’t have many choices. When a high paying temporary position opens up for taking care of wheelchair-bound Will Traynor. He’s moody and bossy and sarcastic, but Lou isn’t having it. Unexpectedly, her feelings for him change. Before she knows it, she’s fighting the clock to make him happy. She’s determined to show him that life is worth living.

What do you do when making the person you love happy also means breaking you heart?

This book marks 9 out of 25 authors, from my New Year’s resolution, that I’ve never read from before. I’ve heard that Jojo Moyes is such a subtle and tender heartbreaker with her books and I’m glad to have gotten a chance to read on. I must confess though, I watched the movie first.

Lou and Will came together to create a love that not only lasts forever, but is also so short-lived in this book. These two clashed and yet, the saying ‘opposites attract’ came to me when I read this. It wasn’t a major bickering fest between them where tension was already obvious. This was one that sprouted from a seed. It grew and developed into something treasurable.

This wasn’t only my favorite scene in the movie, but in the book as well. The excitement is so sky high. Don’t tell me that you’ve never felt this excited about something. Life is indeed too short not to feel this way and more than once.

I felt many different things as I read this book. But most prominently, I’m not entirely feeling it. It is sweet and tender and raw and awkward. It’s so many things, and everything that makes it feel real. Lou leads an incredibly ordinary life. Like seriously. Following her every move, it is just that. Since I do the basics of everything she does: house chores, go to work, hobby around, bicker with the family and then repeat the same thing over and over and over and oh my god this is my life. I don’t have a particular interest in my own life on such a small scale, so I don’t enjoy reading about it. BUT! The story has great depth and meaningfulness that I can’t begin to describe. It’s the little parts, the parts of humor and love between Lou and Will that had me staying. We humans live for those bits in real life. They’re warming and fulfilling.

And as this book also points out, they also end. On top of feeling slightly bored, I felt heartbroken. Lou is fighting, for the first time it seems, for something she desperately wanted and that was Will. Her job became the excitement she needed. She hopes that Will will decide against going to Dignitas, a place that a person can go to die legally. I blanched at hearing about that place.

There were a few characters that really rubbed me wrong. The major one was Patrick. I was gritting teeth with that man every time he opened his mouth! I felt incredibly confused as to how Lou came to date him. He’s so self-absorbed. I couldn’t stand him, and Lou’s been with him for years!

Slow-going and bit by bit, Lou’s life became less ordinary and more extraordinary. Patience is greatly needed. If you can break through then definitely read this. It’s not bad, but it just wasn’t for me. The pull wasn’t strong to garner my attention, which upsets me because I’d heard so many wonderful things about this book.

“You probably wouldn’t look at me twice. An ordinary girl, leading an ordinary life. It actually suited me fine.” (Lou, p. 18)

“I couldn’t tell anyone. That was almost the worst bit. I was now complicit in the Traynors’ secrets.” (Lou, p. 113)

Side Note: I am SUPER sorry for the wait. I know I usually try to get something up every other day, but this week has been ridiculously busy. I’ve been getting swamped at work. I do have reviews coming still.