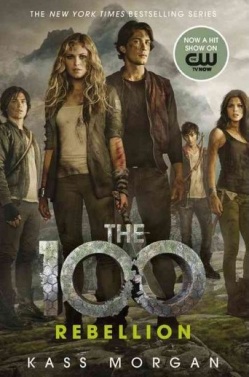 There’s no such thing as peace on Earth.

Things are finally beginning to look up for everybody. After all of the hardships from environmental adjustments to other survivors of the planet’s aftermath of the cataclysm things are coming together. Now, those once deemed delinquents only sent to Earth as guinea pigs are leaders of their community. The last of the dropships have come down to Earth and they’re all getting ready to celebrate in light of reunions and togetherness with neighboring villages.

Then suddenly, the celebration is brought to an end before it begin when cultists that worship the planet attack the colonists, steal their supplies and even kidnap some of the colonists. Clarke, along with Bellamy and others set out to rescue their friends. Those captured can do nothing, but go along with these people while trying to reason with them or they may end up dead.

Their rescuers have to get to them as many lives hang in the balance. More than that, they will need to do whatever it takes to call this dangerous planet home.

Yes, I know. This is book 4 of the series, which if you read my previous review—The 100: Day 21—you know I’ve skipped a book. I’ve skipped two, actually; 1 & 3. No shame. Sometimes it just happens. Though, I do have to say, this one just like the previous, didn’t hit out of the park for me. And no, it’s not because they were out of order. Kass Morgan still does a wonderful job in keeping me informed about what’s been happening. I really love a good recap because I get nostalgic every once in a while and like to relive memories of what’s happened in the past. It really shows how far the journey has come for these characters you’ve been with since the beginning, or in case you’re starting in a random place, you get curious and go back to the beginning.

There were a few characters introduced in this addition to the series. Max, a leader of the villagers that are celebrating with the colonists. Anna, who turns out to be from one to the dropships that got lost. And lastly, Soren, the big bad leader of the cult that’s out to do Earth’s will (which is super creepy.). There were plenty of other characters, but they weren’t memorable enough for me to remember them and that really sucked. There were several times that I reminded about who our main characters were, but at this point I’m skimming past it because I’ve been told the same thing already. I just wish I’d been shown more through their actions instead.

On a side note: Octavia’s character could’ve been so much more. In the midst of being one of the ones kidnapped and trying to find a way out of this cult hell, she meets Anna. The chemistry was instant and I was amped up!  But. Yup, there’s a but. The representation of LGBT with her incredibly irked and pissed me off. It’s not because she didn’t represent it correctly in some way that it felt fake. Love is love, but it moved so damn fast and was barely acknowledged ergo representation fell flat. There was nothing aside from a glance or even romance. It’s literally Girl meets Girl –> Girl and Girl automatically dating. You blink and you miss it. There was no in-between, no discovery, no depth, making it feel utterly random, like okay, let’s just add this in for the hell of it because we need a gay character. *queue my frowny face* Now, when the circumstances are you being held hostage by a cult, I get it, but there wasn’t much to go on. I wanted to know so much more about them. This was a big moment for Octavia. I was all gushy at this prospect but got upset because it was a big poof. Maybe it was just me that felt this way…

There was still a lacking in intensity, not as much as in the previous one I read, but still. I couldn’t get attached. Each character just felt flat. Aside from how they moved forward, they didn’t move upward. There was no true growth. They were still acting like petulant children and on a planet that could eat them alive. It really bugged me! They landed on the ground before everyone else and that does put them in a better spot for leadership, but they don’t act like leaders. They still bicker and bitch and blah! I know that they’re still teenagers, but still. There’s that level of maturity and intuition you get when your life is threatened on a constant basis. They didn’t have it.

I will say that there were a few surprises at a few corners. That was quite pleasant. They didn’t toss me around and spin me, but they did catch me off guard. I’ve got appreciation for them. It was a definite upgrade from Day 21 in that area.

The tone of the characters are still relatively the same. Bland. There so much lack ing in detail. Everything felt plain. This whole world they’re in is still so brand new and it’s like the place is just shrug worthy. There’s a lack of awe. It leaves me really friggin’ confused.

Like I said, this book didn’t do much for me. There wasn’t enough distress to make me feel like these people were in any real danger. You know that feeling you get when some serious stuff is about to happen and your heart pounds, you may even sweat a little, wondering and worrying whether your characters will make it? Its predictability made me lose any excitement I had.

Also, this could all be just because I’m picky. It hits me sometimes. Some people have really enjoyed this series. It’s one of those ones on the fence. Either you really enjoy it or you don’t. I fell on the side of those who don’t.

“Some people look at the world and see only what they can take from it. What they can can reap, steal, carry away.” (Soren to Glass, p. 141)