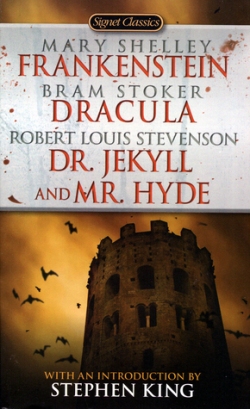 Victor Frankenstein is a man of great intelligence and seeks the greatest mysteries in life as a scientist: eternal life. He goes one step further; he seeks out a way to bring life from death. When he succeeds, he isn’t excited about the revolutionary accomplishment, but utterly horrified. Under terrific duress, he tries to escape his disfigured and horrifying creature, only for more horrors to follow him wherever he goes, resulting in ultimate dread, loss and insanity.

The Gothic horror tale of Frankenstein is the first in my three story mass market.

Warning: There is a chance that this review is spoiler-y, though with the novel being well in-depth, maybe not that spoiler-y.

Having seen many different renditions and portrayals of the great Victor Frankenstein and his creature, I was glad to finally get to read the book. I was surprised by many things. One being that the great Dr. Frankenstein wasn’t a maniac as portrayed…

It’s rather the opposite. Key word is misery. And death. There was a lot of death in this fantastic horror. And yes, there were many similarities by the great Gene Wilder and others, but still. NOPE.

I really enjoyed how this story was told. The POV was from Victor Frankenstein, but not in a present tense. You begin with letters from a man, Walton, to his sister while he’s on a ship voyage and then stumble upon Victor Frankenstein who then relays his tale to the man. You’re reminded that he’s telling you this with speckles from him such as, “Let me regain my breath” and “Let make sure I recount this correctly”. I loved that the most, I think.

Something that pickled me, and yes, I said pickled, was Igor. Igor, always known in films to be Dr. Frankenstein’s assistant in his experiment actually doesn’t exist. Henry Clerval is the closest character to compare to the disfigured and seemingly dumb character, though he isn’t those things in the book. My mom even tossed in her thoughts when I discussed it, saying, “I guess the movie producers/creators thought the great doctor was inept and gave him an assistant.”. LOL.

The strongest element that really pulled me in was the themes. While this is an element carried in most books, it’s not one that usually captures my attention like fireworks. Fireworks were had here with the themes. As you know, I discuss what draws me the most to the books I’ve reviewed here. In some cases it’s the characters or the setting because of how detailed it is and how beautiful of a visual it can be. Other times it’s how the book made me feel and how I related to these emotions. It’s all the usual. Frankenstein was special.

One of the themes that stuck out was in how people treated the creature. I refuse to call him a monster, because he didn’t truly become a monster until forced, and even still, he is just struggling to survive and figure out the world, like all of us. Though, I believe we call it adulting these days. So if he is a monster then aren’t we all?

More so, he was deemed a monster mostly because of what he looked like, adding (to this theme of being a monster) that he was judged based on what he looks like-something people everywhere has dealt with before at one time. After all, there’s one of those golden rules: Thou shalt not judge a book by thy cover.

And that leads me to the second theme. For those who have read this tale, you know that Victor Frankenstein’s creature comes to find the doctor after his creation/birth. He tells him the tale of his journey and how he came to learn how to talk and live off the land which shows, in my opinion, an off-handed, coming of age theme. The creature is full-grown when brought out of death and to life, but he goes through the motions of figuring out who and what he is all by himself with nobody to guide him, except those he watches from afar.

A longing for love and acceptance followed this one because the creature’s yearning that came from his tale of self-exploration and abandonment. In one way or another, finding a partner in life, one of equality and that shares in your living of it, is one of our greatest goals. It could go from having a best friend to a pet to having a soulmate in life. To see the creature express this need was fascinating and intriguing. It’s all he wanted. I was ultimately sad when it was refused.

While the book did have its repetitive moments, the pacing was quick, yet steady without hiccups. More so, I was consumed by the places Victor Frankenstein traveled to and how his creature sought to be like other people and be accepted by them. The novel is truly tragic for both parties. For those who enjoy horror, take a moment to read this classic. You won’t get scared out of your pants. That’s not what this kind of horror is. It’s that you are understanding another person’s horror.

“It was a strong effort of the spirit  of good, but it was ineffectual. Destiny was too potent, and her immutable laws had decreed my utter and terrible destruction.” (Victor, 39)

“Do not despair. To be friendless is indeed to be unfortunate, but the hearts of men, when unprejudiced by any obvious self-interest, are full of brotherly love and charity. Rely, therefore, on your hopes; and if these friends are good and amiable, do not despair.” (De Lacey to creature, p. 133)

“…For while I destroyed his hopes, I did not satisfy my own desires. They were forever ardent and craving; still I desired love and fellowship, and I was still spurned. Was there no injustice in this? Am I thought to be the only criminal, when all humankind sinned against me?…” (Creature, p. 221)

On a separate note, I received something UBER awesome today and just had to share how grateful I am. I am a very big fan of Rachel Caine’s work (Morganville Vampires) and have been meaning to get my hands on The Great Library series. Well, today I received a mysterious package and the first three novels of the series were inside.

Being Becky is pretty damn accurate.

They have been added to my immediate queue line aka the back of my couch so I imagine I will be getting to them in the Spring. I’m very excited and grateful to whoever sent them and look forward to talking about them with you all, my hapless bookworms!

P.S. Song today? All These Things That I’ve Done by The Killers.

You can also find me:

One thought on “It’s Alive!! Now Beat It With a Stick. (Frankenstein – A Book Review)”